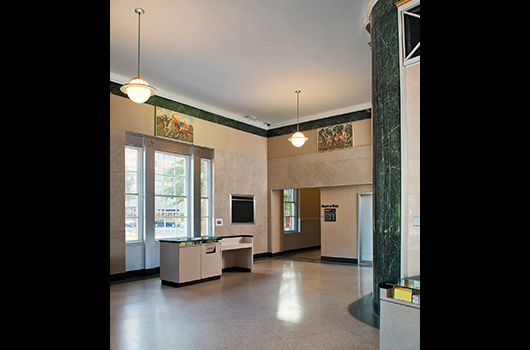 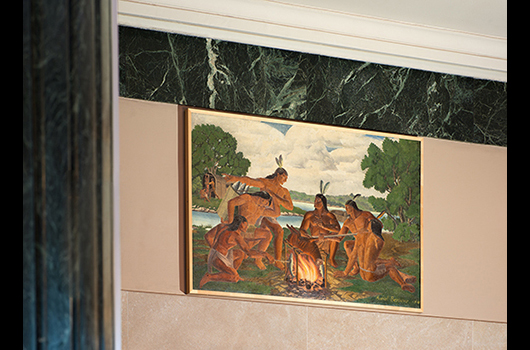 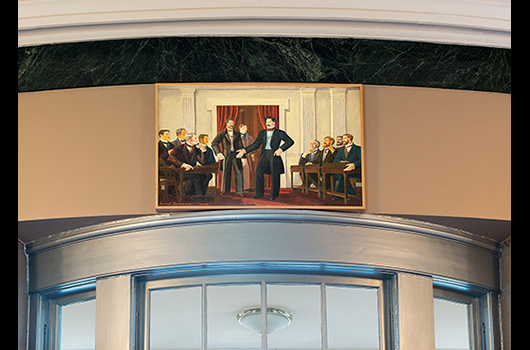 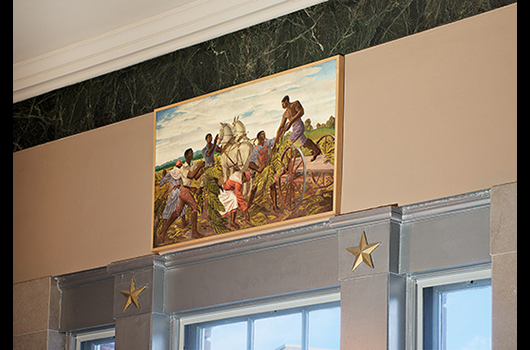 These seven murals, painted by Washington, DC artist Auriel Bessemer, were among more than 1,000 murals commissioned by the Treasury Department’s Section of Fine Art between 1934 and 1943. Unlike the Works Projects Administration which provided economic support for artists, the Section of Fine Art was not a relief program, but instead sought to beautify new federal buildings with high-quality paintings and sculptures. In 1939, Bessemer was invited to contribute to the Section’s beautification efforts by painting murals for Arlington’s new central post office in Clarendon. He was paid $800 for the job.

As a public commission, Bessemer was encouraged to depict imagery emblematic of national ideals as well as local history. While developing preliminary sketches, Bessemer conferred with Elizabeth Magruder, Commissioner of Arlington County, to gain approval for his proposed subject matter. Although concerned about portraying General Robert E. Lee and Virginia’s Confederate past, Ms. Magruder approved of Bessemer’s designs. Bessemer also submitted technical information to the Section regarding materials he wished to use. He initially proposed a monochromatic under-painting of egg-tempera with subsequent colored oil glazes. Due to time constraints, Bessemer later requested permission to employ direct oil painting, a more efficient method.

These murals are significant artifacts of our national history, but also symbolize the fortification of Arlington’s identity in the 1930s and 40s. The opening of the new post office unified Arlington as a distinct county, rather than an agglomeration of neighborhoods. Bessemer’s murals contributed to this objective by illustrating local destinations with which residents could identify, such as Great Falls and Roosevelt Island. By focusing on such themes, Bessemer added to the sense of local pride and regional history, and created what is probably Arlington’s first work of public art.