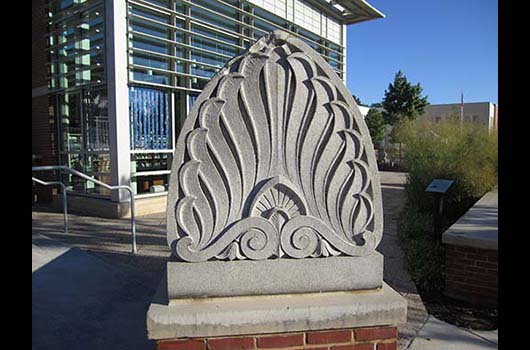 This acroterion originally decorated the pediment over the main entrance of the Abbey Mausoleum, which overlooked Arlington National Cemetery. Built in 1926 by the United States Mausoleum Company, the Romanesque-style building featured an impressive granite exterior and marble interior and drew comparisons to a cathedral. The mausoleum’s thirteen stained glass windows, four of which are on view inside the Westover Library, are attributed to Louis C. Tiffany and Tiffany Studios, but it is not known who designed or carved the acroterion. Now easily visible at eye-level rather than high above, the acroterion visually anchors the intersection of Washington Boulevard and McKinley Avenue and exists as an independent landmark, rather than one of many architectural ornaments.

It was resited to the Westover Library in 2009.