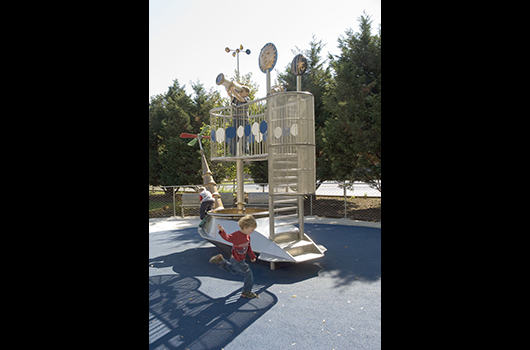 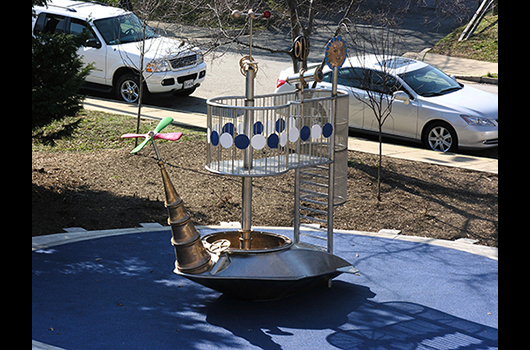 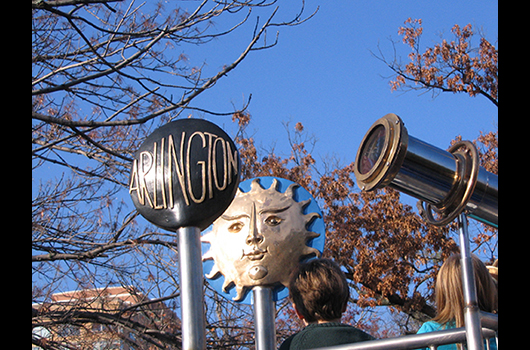 Spielschiff (“Play Ship” in German) by Bonifatius Stirnberg is an interactive play sculpture with parts that can be repositioned, swiveled, peered through, and explored. Children can imagine they command a magical vessel either from the lower level’s revolving hull, or in the crow’s nest, equipped with kaleidoscopes and a weathervane. Stirnberg recast Spielschiff from molds he used in 1979 to create an identical piece for Aachen, Arlington’s sister city in Germany. Here, a medallion on the upper level is cast with the word Arlington on one side, and Oche (Aachen in dialect) on the other, representing the sister cities relationship.

Born in 1933, Stirnberg trained as a wood sculptor, carpenter, and earned his sculpture degree from the Kunstakademie Düsseldorf, where he studied under renowned German artist Joseph Beuys. Stirnberg has operated his studio and adjacent foundry in Aachen since 1973 and has created over 100 public artworks that can be found worldwide.

Spielschiff was developed in conjunction with Planet Arlington, a cultural initiative designed to explore issues of immigration, globalization and the environment through the lens of the arts and humanities. It is located in Maury Park, adjacent to the Arlington Arts Center.