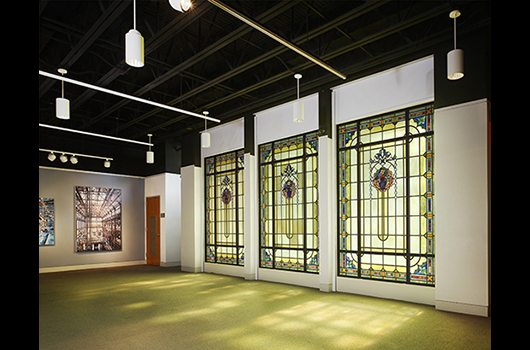 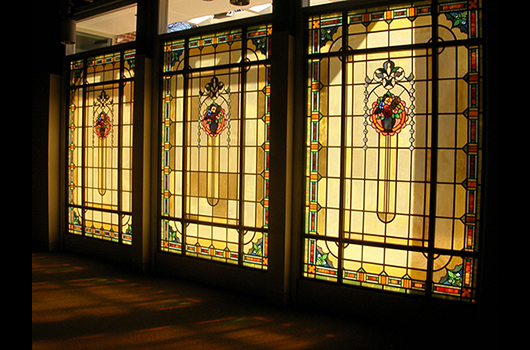 These stained glass windows originally ornamented the Abbey Mausoleum in Arlington. Built by the United States Mausoleum Company from 1924 to 1926, the Romanesque style structure neighbored Arlington National Cemetery. With its granite exterior, marble interior, and stained glass windows, the mausoleum served as a prestigious burial ground. However, with the bankruptcy of the managing Abbey Mausoleum Corporation in the 1950s, the building fell victim to vandalism and neglect.

In 2000, the U.S. Navy gained ownership of the site and, based upon the mausoleum’s poor condition, decided to tear it down. Arlington was permitted to salvage architectural features from the building, including the windows. At the same time, the enormous task of relocating remains and contacting the families of those interred at the mausoleum began.

Twelve of the thirteen windows, such as those installed here, had a simple geometric border with a central floral composition. The thirteenth and largest window portrayed Christ and was dedicated to E. St. Clair Thompson, a wealthy Mason interred at the mausoleum in 1933. While removing the stained glass windows, the inscription Louis C. Tiffany N. Y. was discovered in the lower right-hand corner of this window. The inscription coincides with those used by Louis C. Tiffany at the time this window was created, confirming its authenticity to the degree possible absent written documentation regarding its commission. Tiffany’s stained glass studio was renowned throughout the late 19th and early 20th centuries.

The restoration and expansion of the Arlington Arts Center provided the windows with a new home. Three windows were restored using matching glass fragments from other mausoleum windows that were damaged beyond repair. The windows now reflect their original beauty and appear as they did when first installed at the Abbey Mausoleum decades ago.